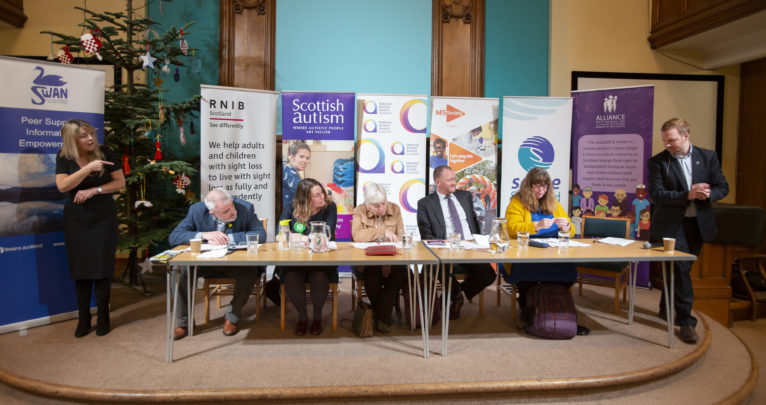 Representatives from the main political parties were grilled by disabled people and families at a ‘hustings’ style Q&A event organised by 10 leading disability charities, including the Scottish Commission for Learning Disability (SCLD).

The charities organised the event to give a platform to disabled people to put their concerns directly to politicians ahead of next week’s General Election.

Despite the fact that one in five people in Scotland is disabled, there has been little discussion about the challenges facing them and it is hoped that this event goes some way to trying to address this imbalance.

SCLD’s Events and Information Assistant, Cameron Smith, asked the panel how they would aim to make Scotland’s public transport system more accessible; and specifically how they would support people who have challenges that are not physical, such as those with a learning disability, like Cameron himself. 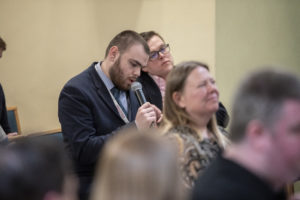 Cameron Smith puts a question to the panel
© Martin Shields

“We need the action from elected politicians to make a positive difference, and listening to our voices should remind them of the need for change.”

Fancy getting creative this weekend? Then take part in our 'Make your own Uno' competition - bit.ly/2SBuUAh The lucky winner will help @treesforlifeuk 're-wild' the Scottish Highlands by planting some trees! Have a look at one we made earlier @SCLDNews 👇 pic.twitter.com/cANG…

The @NIHRresearch have produced a Themed Review on 'Health and Care Services for People with Learning Disabilities'. You can read it here - bit.ly/2HKLvwu #learningdisabilities #health #socialcare pic.twitter.com/9szT…

Let us know what you're doing to celebrate Scottish Learning Disability Week 2020! The theme this year is 'My Environment - My place, my planet'. Share your plans now - bit.ly/2V8enXp #LDWeekScot2020 pic.twitter.com/c0N3…

Have you ordered one of our fantastic #LDWeekScot2020 'Get Involved' packs yet? They're full of fun activities + stickers, bunting, posters & info! They are FREE and we only have a limited number to give away, so send us an email or give us a call on 0141 248 3733 now! pic.twitter.com/DchW…

At the launch of SCVO's Policy Forum 'Manifesto for the Future' with the key themes of Planet, Humanity and Citizenship. pic.twitter.com/KUsG…